Of course, this is an extreme case, but as vacuum pressures get lower and lower, even the most seemingly secure and pristine of systems will soon show themselves to be less than tight. Tightness (or “the absence of leaks”) is required for numerous reasons, including: to ensure and maintain the pressure/vacuum; for product safety; for environmental standards; and for process efficiency. There are two aspects of leak technology worth examining: leak detection and leak measurement.

Different vacuum processes and applications call for different leak rate requirements. Indeed, what is acceptable at a lower vacuum would be considered utterly unacceptable (and certainly highly dangerous) at a higher vacuum level. The only credible method to detect leaks smaller than 1x10-6 mbar*l/s is with a helium leak detector. A leak diameter for 1x10-12 mbar*l/s (which equates to 1Å) is also the diameter of a helium molecule, and is the smallest leak rate that can be detected.

Why is helium used to detect leaks?

Helium is used as a tracer gas to detect leaks for several reasons. These include the fact that it constitutes only ~ 5 ppm in air so that background levels are very low. Helium has also relatively low mass so that it is ‘mobile’ and is completely inert/non-reactive. Helium is also non-flammable and generally widely available and low cost.

This association with helium is one of the reasons why one of the most accurate and rapid leak detection methods employs helium as the tracer gas, and a mass spectrometer for the analysing/measuring. Furthermore, helium is chosen as a tracer gas because it is light, very quick and absolutely harmless.

Helium detection works in the following way: the unit being checked is either pressurised from within or else pressured from without with helium. The gas from any potential leaks is collected and pumped into the mass spectrometer for analysing, and any value above the background trace of helium is evidence of a leak. The spectrometer itself works in the following way: any helium molecules sucked into the spectrometer will be ionized, and these helium ions will then “fly” into the ion trap where the ion current is analysed and recorded. Based on the ionization current the leak rate is then calculated.

The reference (or background) reading for helium is an important part of the process. This reference reading provides the “background noise” for helium, which can be thought of as the ambient level of helium. The majority of this background helium is contained in between 100 and 150 micro-layers of gas molecules and is permanent gas (contained in the air) that is in the leak detector, pumps, test part etc. The removal of this surface helium is called “degassing” and starts when all of the gas has been pumped out, once the molecules have been “desorbing” from the inside surface of the metal. This desorption starts at a pressure of about 10-1 mbar. Such degassing by lowering the pressure or by heating the chamber surface is not unusual, but even then does not totally eliminate all the gas at the surfaces. In addition to surface helium, “standby” helium is also contained in O-rings which act like sponges, whilst also providing a good indication of how clean the unit is. Modern helium leak detectors are able to constantly measure and calculate this internal (background) level and automatically subtract this from the leak rate measurement.

To be able to calculate a leak rate for gasses, pressure plays an important role in specifying the size of a gas leak). The leak rate is the amount of gas that flows through the material/membrane at a given pressure differential per time. The basis of leak rate calculations are: the diameter of the leak is circular; and the leak channel is equivalent to the thickness of the material that the leak “passes” through. Leak rate = gas amount/time = pressure x volume/time, and is measured in mbar*l/s or equivalent units.

There are a number of leak detection methods--which one to employ--is roughly based upon the pressure/vacuum under examination. The simplest is the bubble test, best illustrated by placing a punctured bicycle pump under water and marking where the bubbles come from, or placing washing-up liquid around the joint of an active water/gas pipe, and observing whether the liquid forms a froth. Both are reliable ways of detecting a low-pressure leak. The bubble test is employed up to vacuums of 10-4 mbar.

How to helium detectors work?

There are two helium leak detection (HLD) methods: integral testing or local testing. The choice of which method to use depends on the situation, as well as what the final product will be used for. The “integral” method shows if there is a leak (but not how many different leaks), the “local” method shows where there is a leak (but exact determination of the leak rate / leak size is difficult). Both of these detection methods can each be sub-divided down into two further parts: “sample under pressure”, and “sample under vacuum”.

The first of the two integral testing procedures is called the “integral (sample under pressure)” method, with the chamber under investigation being placed in a sealed container. The chamber is pressured up with helium and the container is connected to the leak detector. In case of a leak, a sample of gas from within the container is drawn off and passes through a mass spectrometer where any increase (over the background reading) in helium levels is recorded.

In the “integral testing (sample under vacuum)” method, the chamber is again placed within a container but in this instance the container is pressurised with helium – and the test chamber is directly connected to the leak detector. A sample of the gas within the chamber is drawn off and passes through a mass spectrometer where again, any increase in helium from the background reading is recorded. 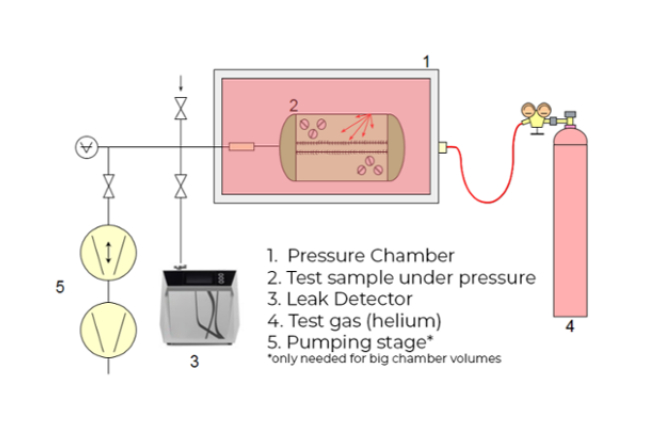 The second pair of procedures are sometimes referred to as the “sniffer” and “spraying” tests. In the “local-sniffer (sample under pressure)” method, the chamber is pressured up with helium and a sniffer device passed around the chamber’s likely leak points (welds, flanges, portals, instrument ducts etc) to suck up any escaping gas. This “sniffed” gas is passed to a mass spectrometer to record any elevated (i.e. above background) helium levels.

In the “local-spraying (sample under vacuum)” method, the chamber is vacuum pumped and helium gas is liberally sprayed/directed towards likely leak points, with the intention that some of this pure helium will be sucked into the chamber. The gas, from within the chamber, is passed into a spectrometer to record any elevated helium levels.

To summarise and simplify the differences between these two types of HLD procedures: the integral method requires the chamber to be placed inside a gas-proof unit (not always a possibility), whilst in the local testing method the chamber is either internally pressurised with helium or internally vacuumed with helium generously sprayed onto the surface of the chamber at likely leak prone points. In both tests, helium enters the leak detector via possible leaks and passes to the spectrometer for analysing.

This video highlights how to check the leak integrity of a test part under vacuum using a spray gun.

There are several standards relating to leak detectors and leak detection. One of these, DIN EN 1330-8, designates the ‘helium standard leak-rate’ for use where a leak-test is carried out with helium at a pressure differential of 1 bar external atmospheric pressure to < 1 mbar internal pressure (which in practice is common conditions).

What is the SI unit of leakage rate?

What is a leak rate test?

A leak rate test is used to determine the rate of the quantity of air leaking into the vacuum chamber. Which leak rate is acceptable is determined by the needs of the application itself.

Environmental and safety standards require manufacturers to guarantee leak tightness of their products by carrying leak testing as part of the production/quality approval process. In order to indicate the rejection rate for a test using helium under standard helium conditions, it is necessary to convert the actual test conditions used to helium standard conditions; there are standard formulae available for these conversions.

When a vacuum system is connected to a leak detector, standard helium conditions must be present during helium leak detection. Using helium to carry out leak tests guarantees reliable and repeatable results that can be quantified and constantly monitored.

It must be appreciated that there are certain challenges associated with detecting small leaks using helium. HLDs are exceptionally sensitive, and surrounding or entrapped helium can easily impact the accuracy of leak detection and leak measurement. A leak detector is itself not a leak-proof unit, which is why a helium-clean environment is essential, if accurate readings are to be obtained. In addition, for very small leaks, it is important to control external factors as these can easily alter results. Finally, ambient helium can enter the system via exhaust and venting ports, as well as permeate through O-rings.

Are you interested in learning more about the various methods available for detecting vacuum leaks? Discover the working principles, benefits and challenges of leak detection in our eBook: