There are several contributions to the gas load of a system. At pressures below ~0.1 mbar, the most dominant is often ‘outgassing’. Outgassing is the result of desorption of previously adsorbed molecules, bulk diffusion, permeation and vapourisation. Adsorption occurs via two main processes, physisorption and chemisorption, and can be described using five (or six) classifying isotherms.

As seen in Diagram 1, contributions to the gas load of a system can come from:

For a leak-tight system in High Vacuum (HV) with no process load, outgassing could contribute up to 100% of the gas load. 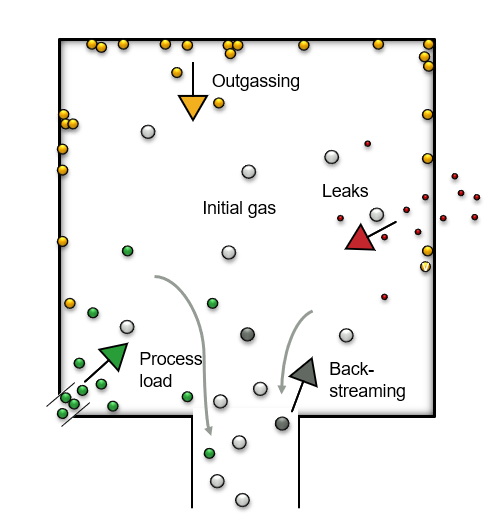 The relative contribution of different species to the gas load varies with pressure. For many HV applications water vapour is the major concern in terms of outgassing. However, for achieving UHV in all metal systems, H2 outgassing is critical. The table below shares typical major gas loads at various pressures.

There are 4 main mechanisms which contribute to outgassing (shown in the diagram below):

The extent to which each of these affects outgassing depends on the composition of both the gas and the surface material (and its history). Outgassing rates are a sum of these contributions. 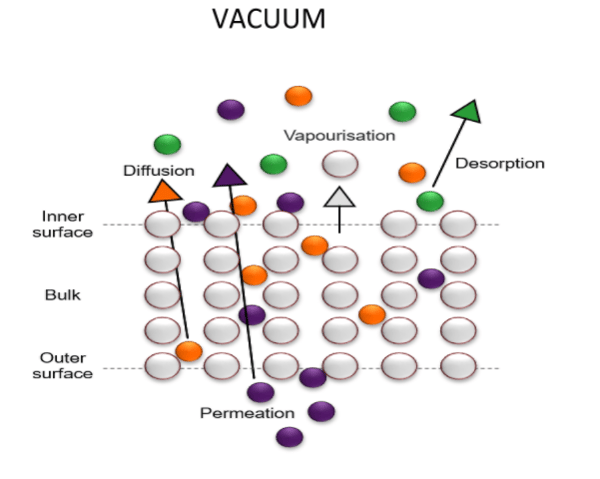 The graph below shows how to calculate gas loads using the outgassing rate equation. 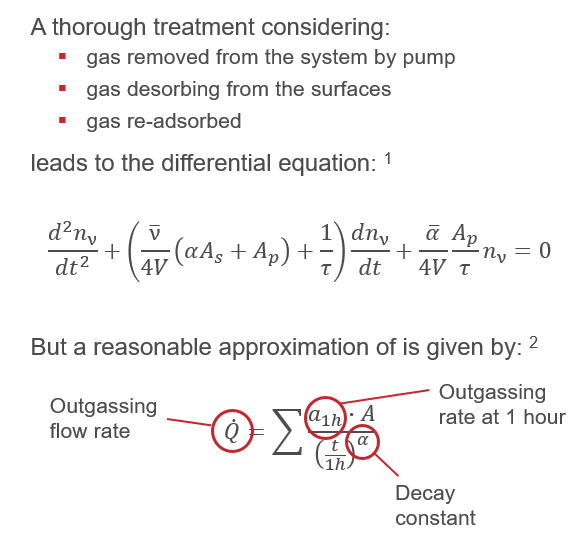 Keep in mind that the value of the decay constant gives an indication of the material and outgassing mechanism. For example:

In the table below, we share typical outgassing values, where t = 1 hour.

Outgassing is often the largest contributor to a system’s gas load (especially below Medium Vacuum) and limits the achievable ultimate pressure. It occurs via several processes including vapourisation, desorption, diffusion and permeation. The major contributions to outgassing depend on the vacuum level but in HV it stems mainly from water vapour, whilst hydrogen is most common when working with metals at UHV.

There are many outgassing rates available in the literature, however there is significant variation in these. While variations in outgassing rates can primarily be attributed to the measurement method used and sample preparation; the development of a standard for rate measurement techniques would be valuable.

Look out for our next post on the ways to reduce outgassing!

In the meantime, why not download our eBook about the foundations of vacuum, its concepts as well as classification of pump technologies? Click below to learn more:

THE FUNDAMENTALS OF VACUUM GENERATION