How to reduce outgassing in vacuum systems

There are four main ways you can reduce outgassing in your vacuum system. These are: cleaning and handling, surface treatment, passivation, and purging and backfilling. In this blog, we will take a closer look at each of these methods.

There are four main ways you can reduce outgassing in your vacuum system. These are: cleaning and handling, surface treatment, passivation, and purging and backfilling. In this blog, we will take a closer look at each of these methods.

These include relatively simple methods which take a short amount of time and are mostly performed on individual parts ex-situ. They’re effective against gross and fine surface contamination and can reduce outgassing rates by anything from 50% to five orders of magnitude. Proper material preparation is vital to achieve low outgassing rates and reach UHV.

Generally, the cleaning process will involve the following steps:

This cleaning should be followed by bakeout for reduced outgassing rates. This effectively reduces outgassing by creating a smooth surface.

It’s important that items are handled carefully once material preparation has begun.  This prevents contamination, as a set of fingerprints (for example) can take several days to desorb. The length of time in which there’s exposure to moisture should be limited wherever possible.

Surface treatments reduce the surface area by reducing roughness; the most common techniques are mechanical polishing and electropolishing.

Mechanical polishing is often one of the first material treatments used to remove gross contaminants, while electropolishing replaces an amorphous surface layer with an ordered oxide layer. Electropolishing is particularly effective against hydrogen/hydrocarbons. The net effect of reducing surface roughness is shown below in diagram four. 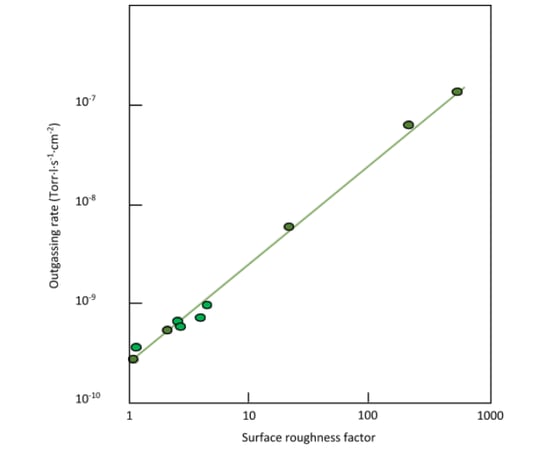 Passivation via coatings creates a barrier layer against contaminant adsorption and permeation. Coatings are usually applied via CVD, PVD or sputter coating at raised temperature (200-500°C) and can be:

As mentioned, bakeout is one of the most commonly used and reliable passivation techniques. The gas load qAB after bakeout to a maximum temperature of TBmax for stainless steel was found empirically to be:

From 100–500°C is required to remove water vapour; higher temperatures up to 1000°C are required for hydrogen removal from the material’s bulk.

Longer and repeat baking leads to lower outgassing rates, as shown in the graph below. 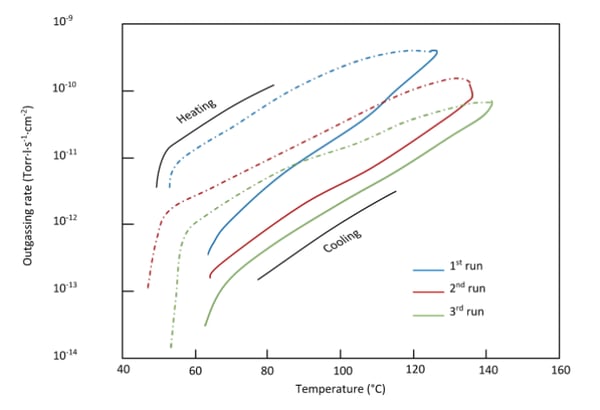 A constant flow of a dry gas through the chamber can remove contamination and reduce water vapour concentration. Even a short purge is effective at reducing outgassing. After a purge flow stops, humidity can rise to over 30% within a few hours. You can see these effects represented in the graph below. 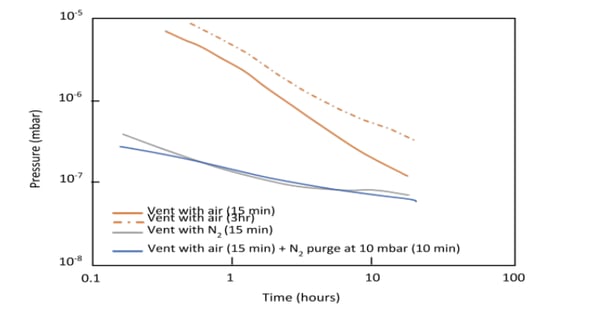 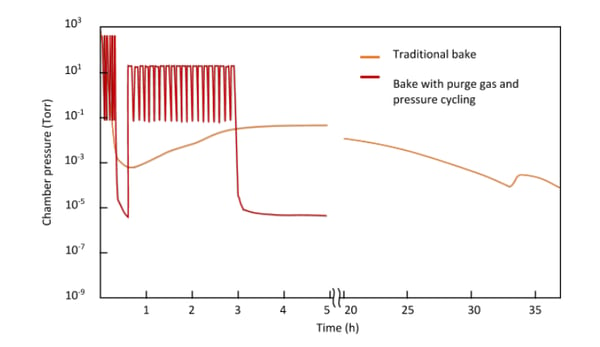 Outgassing can limit the achievable vacuum in a system and is often the most important gas source in HV and UHV. There are several techniques to reduce outgassing as much as possible. These include actions to be taken ex-situ such as surface cleaning and treatments and vent-purge cycling and system bake-out.