According to the Union of Concerned Scientists (UCSUSA) about 2,200 active satellites orbit our planet and an additional 100 are launched every year. Most of these satellites are used for telecommunication and, with GPS projects like the European GALILEO and the SPACE-X Starlink (which intends to bring internet connection to every spot on earth) on the horizon, their number will continue to grow.

It is obvious that all man-made objects in space are exposed to a vacuum. This blog deals with the vacuum requirements for simulation of space conditions on earth.

Space is defined as altitude more than 100 km above sea level. The residual air pressure there is in a vacuum of 0,27 Pa (2,7 x 10-03 mbar).  Satellites in low earth orbit ('LEO’, 200 - 2000 km height) like the International Space Station 'ISS' (orbit approx. 400 km, p < 10-07 mbar) are still subject to some friction from the gas. This results in a height loss of 150m per day and so requires repositioning. Most satellites for telecommunication, TV broadcast and meteorology use the geostationary orbit ('GEO', 35.800 km height) which is only possible above the equator. Here the vacuum 'pressure' is in the low ultra-high vacuum range.  Between LEO and GEO orbits is the so-called MEO where the GPS and Galileo Satellites are positioned.

As a result, intensive testing and training on earth prior to launch is mandatory, and an important test to do before launch is to simulate the satellite in a vacuum.

How does a vacuum chamber work?

For this test, the pressure has to be in the high-vacuum range: 10-07 to 10-06 mbar. The test is done mostly in combination with the temperature cycle test. This is because satellites experience the heat and cold in space depending on whether they are in the earth’s shadow.

For the temperature cycle test, we use a thermal vacuum chamber test; some test chambers even simulate the solar wind! These chambers have volumes of up to 10,000 m³ 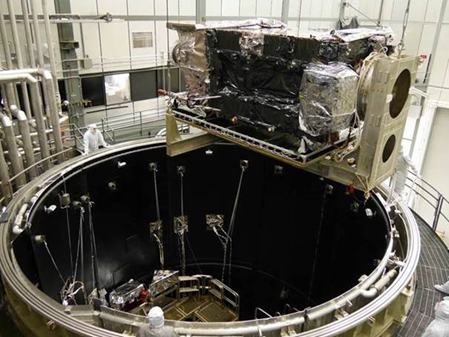 As well as testing the satellite itself, each individual component is tested individually prior to integration into the system. This requires test chambers with 1 to 100 m³ volume.

Evacuating thermal vacuum chambers means pumping out the air and then pumping the gasses released from the walls and the test objects. Here water vapour normally contributes to more than 80% of the residual gas composition. Evacuation time can be a day or more as satellites are not mass products and the tests need long preparation anyway.

The required pumping speed for different chamber volumes can be taken as a rule of thumb from Figure 1. 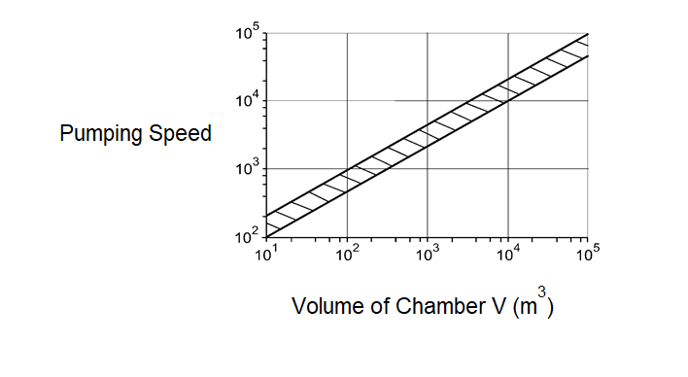 Roughing before starting the high-vacuum system is normally done by large 3-stage roots blower systems to pressures below 10-02 mbar. In the 60s and 70s, high-vacuum was generated by large oil diffusion pumps or by panels cooled by liquid helium. Today, oil-free vacuum systems are almost a must as they avoid any risk of oil contamination in the chamber. Imagine oil layers on expensive, sensitive optics in a satellite after the vacuum test! Refrigerator-cooled cryopumps, with their immense pumping speed for water vapour have been the standard for the last 3 decades. They can deliver up to 1,000,000 l/s for H2O and 60,000 l/s in parallel for air. During the test, the roughing system can be switched off.  Roughing is generally done by dry screw pumps combination with roots blowers today.

What is a thermal shroud?

In thermal vacuum chambers, an internal shroud is capable of supplying variable temperatures. The temperature ranges from 77 K (if liquid nitrogen is used) up to 450 K. This shroud is reflective on the outside (polished steel or nickel plated) to reduce heat radiation and painted black inside. For the vacuum layout, this means that the vacuum surface is almost tripled, resulting in a high degassing load.

Figure 2 shows a typical simplified vacuum scheme; a 60 m³ chamber with a 30.000 l/s cryopump and a single large screw pump for roughing. Not shown are the gate valve of the cryopump, the regeneration line for the cryo and the vacuum gauges. 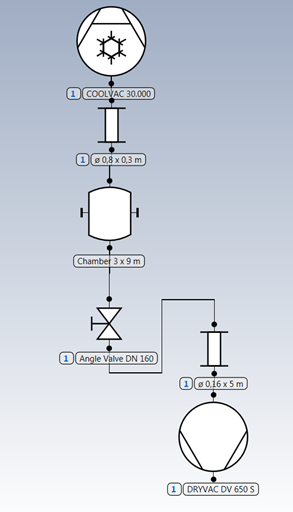 Figure 3 shows the evacuation of the chamber without thermal shroud. The test pressure 1 x 10-06 mbar is reached after 12 hours. 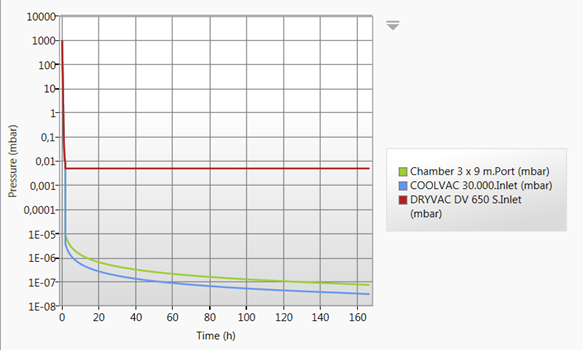 Figure 4 shows the result with thermal shroud. Evacuation time is much longer due to the larger surface and the degassing especially from the black paint. In this case an additional roots blower in the dry roughing system or a large turbomolecular pumps would reduce the roughing time below the crossover pressure of the cryopump. 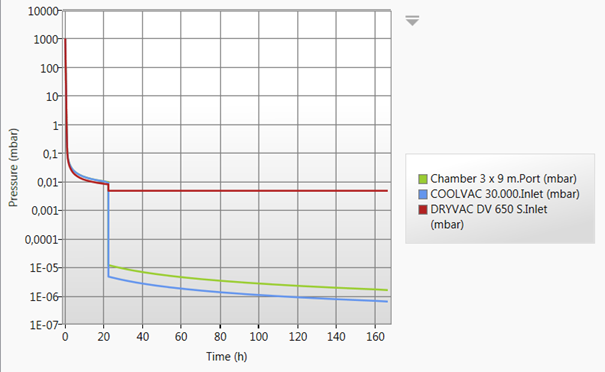 Figure 4. Evacuation of chamber as above, but with black painted shroud assembled in chamber

To reduce the evacuation time, exceptionally large chambers often have additional cold plates inside them. If cooled with liquid nitrogen at 77 K, they condense a large amount of the water vapour.

Large Space Simulation chambers have large diameter doors to bring the test objects in. To reduce the leak rate of the door, double seals with intermediate pumping are used.

The quality of the vacuum is generally monitored and documented by RGA analysis and calibrated vacuum gauges. 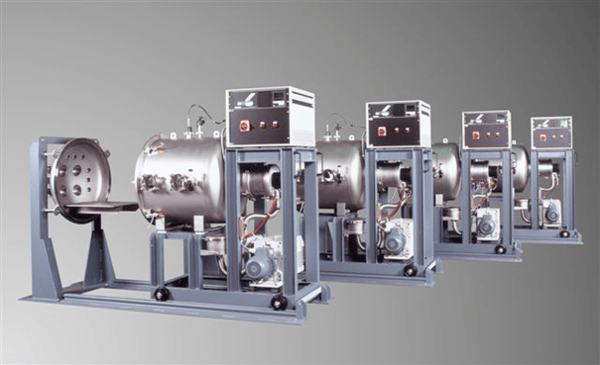 Image 3. Small test chambers with turbomolecular pumps; vacuum system and chamber can be moved to the left to introduce test object.    (Source: Leybold) 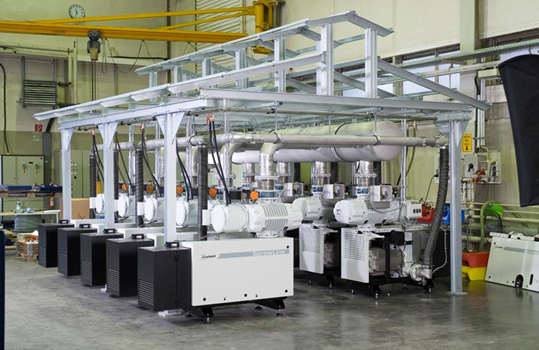 Satellites require frequent repositioning to keep or change their orbit; standard engines generate thrust by chemical propulsion done through catalytic reaction of hydrazine (N2H4) to N2 and H2, for example. Today, electrical propulsion is an attractive alternative; these ion thrusters accelerate ions (in most cases the heavy inert gas Xenon) neutralise them and thrust them out in a jet. The advantage is either a lower payload or longer operation time. To generate sufficient thrust, the gas flow is 0,1 to 10 mg/s. Even the thrust is relatively low compared to chemical propulsion, but it can accelerate constantly for long time and might ensure travel to Mars and other planets in the future.

However, these ion thrusters have to be tested for longer periods in a vacuum chamber under space conditions. To pump this gas flow at pressures of 10-05 mbar or below requires pumping speeds for Xenon between 10,000 l/s to several 100,000 l/s! To add further complexity, Xenon is not easy to pump: its poor heat conductance might overheat turbomolecular pumps during compression, and its large molecular weight causes a poor conductance in baffles and valves, resulting in the reduction of pumping speed of > 50 % for cryopumps and diffusion pumps.

To achieve this tremendous pumping speed specific for Xenon to space simulation chambers, the solution is to add cold panels to the chamber. These panels are cooled to temperatures below 50 K by single-stage cryocoolers, similar to the double-stage coolers used in standard cryopumps. The Xenon gas is then condensed directly inside the vacuum chamber. A small cryo panel of approx. 600mm diameter has a pumping speed of 16,000 l/s – inside the chamber – with zero conductance losses! For example, with 5 of these coolers installed, 80,000 l/s pumping speed can be achieved. Also, because the design of the chamber is much simpler compared to other conventional pumps, the base cost can be reduced significantly. No large flanges and costly valves are required! Finally, the capacity is up to 20 kg of Xenon, so long-term stability tests can also be performed. These cold panels pump the Xenon selectively. Only gasses condensing at lower temperatures like N2 or O2 have to be pumped by additional pumps, either by regular cryopumps or turbomolecular pumps. 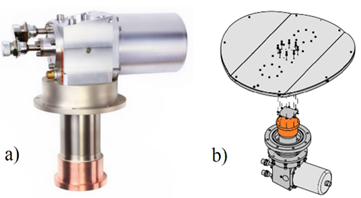 Image 5.   a) single stage cryocooler         b) cryocooler with condensing plate for Xe 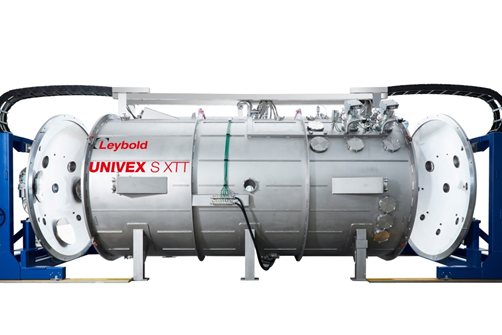 Without simulation of space conditions prior to launch, space flights would be not possible. Space simulation is, therefore, an important and attractive application of vacuum technology. Tests under vacuum (in space simulation chambers) are mandatory for all equipment to be used in space. The recent developments for electrical propulsion are a driver for the development of vacuum technology for effective pumping of Xenon.

Learn more about the concepts, uses and implications of Vacuum Simulation by downloading our free eBook today:

AN INTRODUCTION TO VACUUM SIMULATION

Ultra-high Vacuum Fittings: What Are Flanges Used For?
What Are the 5 Signs of Vacuum Pump Failure?