In our blog: 'Introduction to Vacuum Coating Technology', we introduced you to various PVD (Physical Vapor Deposition) methods and how products are typically coated using vacuum technology. Then, in our second blog 'Introduction to Vacuum Coating by Thermal Evaporation', we focused on coating techniques and applications using thermal evaporators and e-beam-evaporators. This blog, will introduce you to sputter technologies, typical uses, and how vacuum technology is applied to the process.

Sputtering is a process whereby atoms are ejected from a solid target material due to bombardment by high-energy particles. Today, it’s a more mature process, usage is widespread and the technology used is quickly advancing.

The sputtering effect was first observed by Grove in 1852 and Faraday in 1854 (for more on its history, see 'Foundations of Vacuum Coating Technology', by Donald M. Mattox. This booklet also shows the historical development of vacuum pumps and can be found here).

The first theoretical discussions and publications about sputtering were released before WW1, but it wasn’t until the 1950s that it truly emerged.  Back then, coating development was more focused on evaporation. In the 60s, however, some of the first industrial, mass-produced products using sputtering technology were chromium sputtered razor plates.

In cathode sputtering, a solid target is bombarded by high-energy ions. These ions are generated by a discharge in a DC field (DC Sputtering). The target is at a negative potential of several 100 Volts, while the substrate is the positive electrode. By introducing an inert gas (in most cases Argon), a plasma is developed due to the ionisation of the gas. The Ar+ ions then accelerate towards the target. Here they sputter cathode material, which then deposits on the substrate (see figure 1). This works well as long the target is metallic. If the target is electrically non-conductive, it will rapidly become positively charged and this field will prohibit the ions from reaching the target.

Often an additional magnetic field under the target is involved (Magnetron Sputtering, see figure 2). In this process, the electrons generated fly in long spiral tracks — enabling a higher probability of ionisation. This leads to higher sputter rates and better focus on the target. 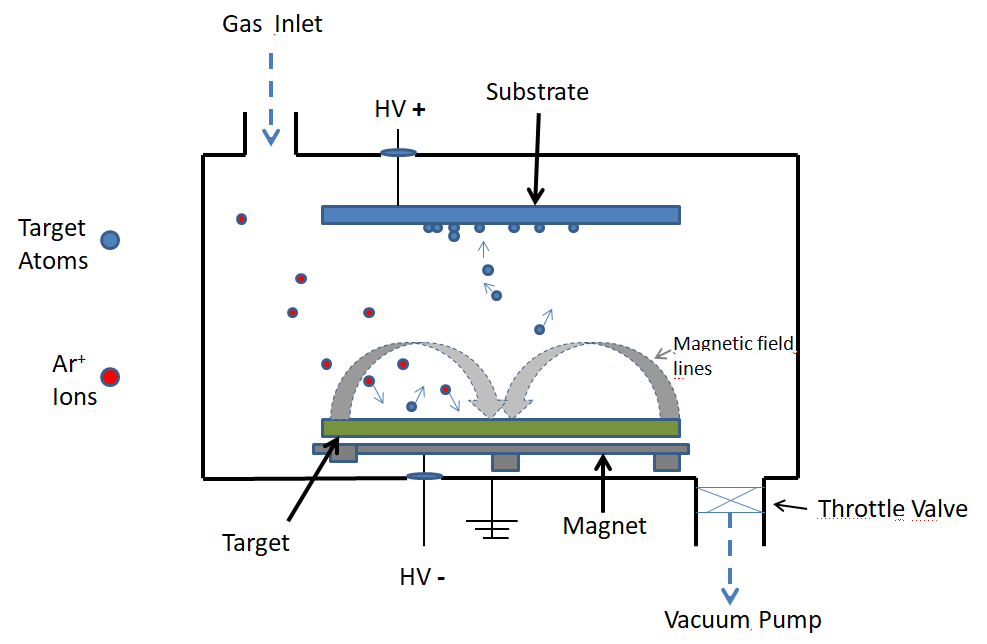 If oxides have to be deposited on the substrate, Reactive Sputtering is applied. In addition to the sputter gas Argon, Oxygen is introduced into the vacuum chamber. Oxygen reacts with the target material into oxides, an example is 4 Al (target) + 3 O2 ==> 2 Al2O3  (substrate).

RF Sputtering works by using power delivered at radio frequencies — often fixed at 13.56 MHz — along with a matching network. By alternating the electrical potential with RF Sputtering, the surface of the target material can be “cleaned” of a charge build-up with each cycle. On the positive cycle, electrons are attracted to the target material or surface giving it a negative bias. On the negative cycle, ion bombardment of the target to be sputtered continues.

For more information on other sputtering techniques, please click here.

Many other variants of sputter techniques exist. The interested reader is encouraged to see the diverse literature, for example at www.svc.org. For each layer to be deposited reproducibly the researcher has to generate a recipe comprising all parameters of the device. Please note that most coatings comprise many films deposited successively.

The vacuum system of a sputter coater is more complex than in thermal or e-beam evaporators. Like all coaters, a base pressure in the high-vacuum range is required. This is necessary to have clean surfaces — especially on the substrate — and avoid contamination by residual gas molecules. Usually, base pressures before initiating the coating process are 10-06 mbar or better. Following this, the sputter gas is introduced, which means an additional gas flow to be handled by the vacuum pump. Gas flows vary from a few sccm in research fields to several 1000 sccm in production devices (note: 1 sccm equals 1,69·10-2 mbar*l/s). Pressures during sputter deposition are in the mTorr range, 10-3 to some 10-2 mbar. The gas flow is usually adjusted by a flow controller, while the thickness of the layer is governed by a film thickness controller.

The turbomolecular pump is the classic workhorse in sputter devices. It enables fast evacuation to base pressure and allows large flows of sputter gas. Most laboratory devices use mid-size mechanical pumps in the 300-1000 l/s pumping speed range, while Backing pumps are rotary vane pumps or small dry pumps (either scroll or multistage roots). In case of reactive sputtering - where oxygen is added - make sure that the lubricants of the pumps (the bearing of the mechanical TMP and the oil in the rotary vane pump) do not oxidate. A classic solution is to add purge gas to the TMP and use oil with high resistance to oxygen in the roughing pump. (For more information, please see our blogs: Working with turbomolecular vacuum pumps, Everything you need to know about scroll pumps and The Working Principle of Multistage Roots Vacuum Pumps).

Today, larger coaters for production use turbomolecular pumps with magnetic suspension. This avoids oxidation of the bearing lubricant and ensures better pump uptime. High throughputs of argon sputter gas also provoke a higher temperature load to the pump. On the one hand, this requires more acceleration due to the higher friction of the rotor. On the other, the heavy argon gas is a poor heat conductor and provides less cooling of the rotor. When it comes to the cooling and backing pressure of the pump at the throughput intended, follow the pump manufacturer’s operating diagram.

The pressure in the sputter chamber is controlled via flow controllers. Control via rotational speed of the TMP is too slow, so often an additional throttle valve on top of the TMP is closed during sputtering. Dry pump systems are the standard today for backing magnetic TMPs.

Many large sputter devices use cryopumps. The advantage of the cryopump in this application is its high pumping speed, especially for water vapor as the base pressure can be achieved faster. Some cryopumps are designed specifically for sputter processes; these pumps operate and regenerate automatically. Note that at high sputter rates, the capacity of the cryopumps might be reached within a week.

The very first cryopumps had to face the problem that argon could already condense at the baffle where temperatures can be as low as 35 K. In this case, argon condenses here but at vapor pressures of just 10-04 mbar. After the coating, such loaded pumps were not  able to reach the required high-vacuum base pressure. Modern cryopump controllers, however, control the first stage of the cryorefrigerator with heaters at temperatures above 70 K.

The following pictures show some examples of sputter coaters — from laboratory use to large production machines. 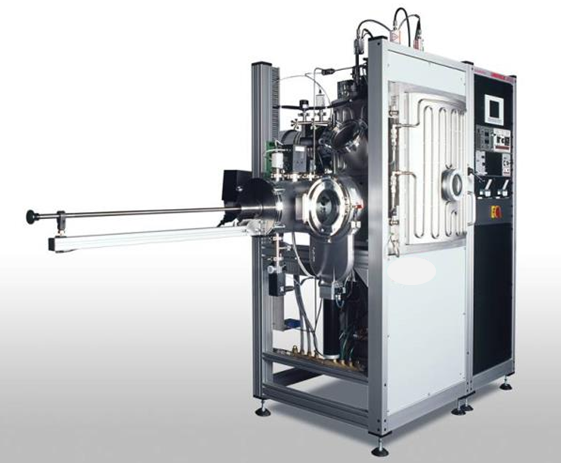 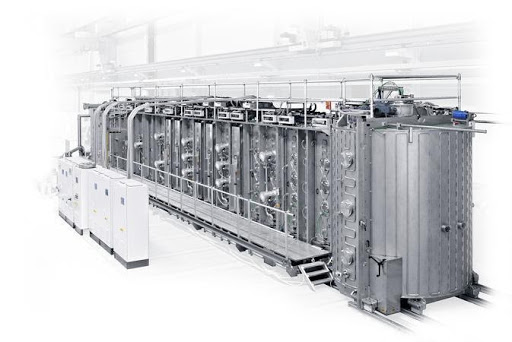 In this blog, we have shown the different basic methods of sputter coating technologies and related vacuum technology. Sputtering is the most widespread and advanced technology for coating thin films for displays, solar applications, semiconductors, sensors, and foils.

Are you interested in finding out about how you can take your vacuum system design to the next level? Then click the link below to request your no-obligation consultation with one of our vacuum science experts:

Ultra-high Vacuum Fittings: What Are Flanges Used For?
What Are the 5 Signs of Vacuum Pump Failure?