The importance of gas ballast for vacuum pumps

When atmospheric air (or a gas) is used as a source for a vacuum system, it will however “pure” it may appear to be invariably contain some vapour. As the pressure drops this vapour will condense out and unless vented from the system form a contaminant which will prevent the pump from achieving its optimum vacuum pressure. In addition, this condensate can enter the pump’s oil-seal where as a contaminant, it can have a further detrimental effect.

In simple terms, a gas ballast valve incorporated into the system will allow a small portion of the compressed gas (containing this detrimental condensate) to be expelled without impacting upon the overall performance of the pump.

What is the theory of gas ballast?

The theory of gas ballast (and indeed their operation) is simple, however, the rationale behind their inclusion in vacuum systems is still shrouded in much confusion and misinformation, and as a result the whole subject is frequently considered somewhat esoteric. Therefore, their inclusion in a vacuum system is all too frequently blindly followed with little thought being given to the simple - but effective - science behind them.

Originally developed in 1935, gas ballast is nevertheless still considered a significant addition to a mechanical oil sealed vacuum pump. When used in this way, the gas ballast helps reduce the amount of vapour condensation (and thus contamination) of the pump’s sealing-oil. By reducing any potential condensation in the sealing oil, the pump can achieve its vapour duty at near full-specification, ensuring the speedy attainment of its ultimate pressure level. 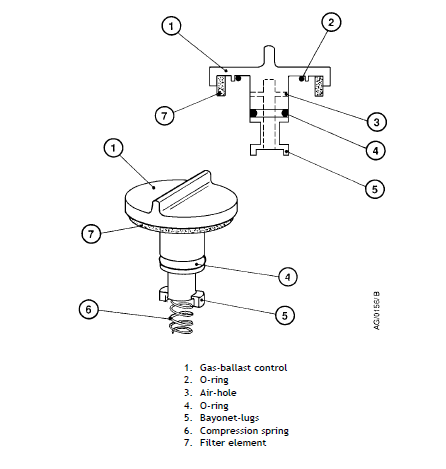 Usually in vacuum work, the gas stream being evacuated from the vacuum chamber will contain water vapour, solvent vapour and/or other unwelcomed contaminants. These contaminants usually occur because they have been “converted” (under vacuum pressure) from liquid molecules to gas molecules prior to (i) their flowing back to the pump where they are “converted back” from a gas to a liquid contaminant within the pump oil, or (ii) exiting the pump itself.

All gasses have the ability to form vapours at temperatures and pressure that depend upon their physical -properties. In simple terms, gas ballasting is the practice whereby air or another gas that is admitted into a vacuum pump, such that vapours can be expelled before they can condense or contaminate the system and/or pollute the sealing oil. Gas ballasting is achieved in the following way: if the pump is “working” a gas that would naturally condense in the pump, the gas ballasting will enable a “pre-outlet” valve to open before the vapour has had a chance to condense, with the result that this condensable-vapour is discharged (to the atmosphere) as in gas phase.

A pump that has been subject to condensed vapour can be “cleaned-up” by using gas ballast. This is achieved in the following way: close the pump inlet port and allow the pump to run with the gas ballast valve in the open position which will help purge the pump. Continue this purging for several hours or overnight (depending on the size of the system and the degree of contamination).

However, if the pump is “smoking” or emitting a visible mist in large quantities, it is very possible that you could return to find a room full of oil-fog. Venting into an extraction hood or using capture filters will help to eliminate this problem. Nevertheless, even if the purging vapours are not actually visible, it should be remembered that in exiting the system, they may also be entering the working environment where depending upon their content and concentration they may pose a health and/or a fire hazard. The use of a gas-ballast oil return kit overcomes this issue.

Find out more about the topic of vacuum measurement by downloading our eBook below.

HOW TO SELECT THE RIGHT VACUUM GAUGE