What is Nuclear Fusion? And How Does it Work?

Aligning with recent breakthroughs in the field, nuclear fusion is being increasingly discussed in the media. But what is nuclear fusion and how does it differ from nuclear fission? And why are so many companies and states investing in fusion research and development?

We answer these questions here before highlighting the enabling role that vacuum plays in achieving nuclear fusion.

How does nuclear fission work?

Currently, nuclear power plants produce energy by exploiting the fission process. Nuclear fission involves taking a large, unstable atom such as uranium isotope U-235, and splitting it into two lighter atoms. This process releases a tremendous amount of useable energy.

Fission is initiated by bombarding U-235 with neutrons. As these neutrons smash into U-235 atoms, they force additional neutrons to release which will interact with more U-235 and create a chain reaction. This reaction can also produce electromagnetic radiation. To maximize energy production, the number of neutrons used in fission must be controlled to prevent the chain reaction from dying or running away. Fission reactors function in the same way as conventional power plants. Fission occurs in a reactor vessel, moderated by control rods. The heat from the reaction is used to heat water and produce steam. This steam then turns a turbine to produce electricity. Additional steps are required to safely dispose of spent fuel as they are radioactive and can have a half-life of over 10,000 years. In many cases, decommissioning costs are up to 15% of the initial capital cost.

To create fuel for nuclear fission, enrichment is first required to increase uranium-235 concentration from the 0.7% abundance found naturally in uranium ore to the 4-5% needed for the fission process. This is done using 1,000-2,000 centrifuge stages. To do this, uranium ore is converted to UF6 gas, processed, and then converted into fuel pellets after the enrichment process. The centrifugal process is carefully controlled under specific vacuum parameters.

Nuclear fusion: the opposite of fission

Fusion reactions of light elements power the stars and produce virtually all elements in a process called nucleosynthesis.

Nuclear fusion is a developing technology that sits at the forefront of current scientific research. With the potential to revolutionize energy production, fusion is the focus of a significant number of national and international projects.

In the nuclear fusion process, two light atoms are ‘fused’ together to create a larger atom. In this way, nuclear fusion is the opposite of fission: instead of splitting atoms, atoms combine to form a larger one. This results in the release of energy. 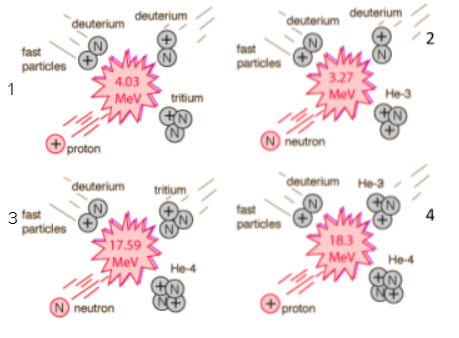 Ideal fusion reactions use a 50:50 mix of deuterium and tritium (reaction 3 in the illustration above) with only a few grams needed at any time. However, this ideal has been difficult to achieve. Currently, all but one fusion device operates using only deuterium (reactions 1 and 2). This is because tritium is rare in nature and must be produced artificially.

Why hasn't viable fusion energy been achieved yet?

Light atoms can only fuse if they are ‚squeezed‘ together for a long enough time. At nucleus radii distances, the attractive nuclear force is stronger than the repulsive electrostatic force. Based on these constraints, the main technical difficulty for fusion is getting the nuclei close enough to fuse. This is why a form of either magnetic or inertial confinement is needed.

Massive temperatures are needed for both types of confinement: over 4x107 K for deuterium–tritium (DT) fusion. That’s 10 x hotter than the Sun!

What are the different kinds of fusion?

Many different approaches that have been proposed to achieve fusion. However, there are only two main kinds of confinement.

Magnetic confinement fusion (MCF) is arguably the most encouraging for commercial energy generation. It uses a series of very powerful magnets, with liquid helium being utilised to cool the magnets and improve device performance. 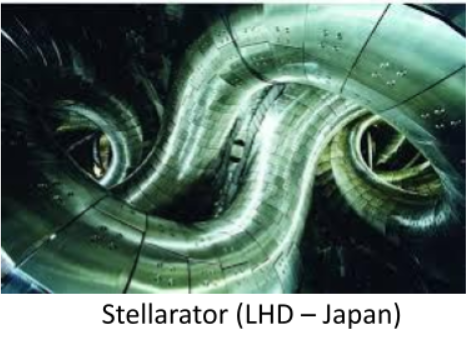 
The most common magnetic confinement devices types are the Stellarator and Tokamak, though some facilities have experimented with devices that use magnetic mirrors. All three of these device types consist of a central vacuum vessel, where the plasma is contained and fusion reaction occurs. The vacuum vessel is surrounded by a cryostat, where the superconducting magnets are housed and cooled. The Stellarator and Tokamak have a toroidal shape, whereas the mirror machine has a cylindrical shape. The magnetic field continually forces the atoms together and the high temperature causes ignition.

The second common confinement type is inertial confinement fusion (ICF). This technique extracts fusion energy by bombarding small pellets (1 to 3 mm) of DT fuel with lasers or charge particle beams to compress and heat the mixture to ignition. Here, ignition refers to the condition that all alpha particles are stopped, which causes the plasma to heat. The compression and heating is done very rapidly with short pulse (1 to 10 ns) high power lasers, X-rays or ion beams which intersect the fuel from many directions. Direct-drive devices deliver compressive energy pulses to the fuel pellet directly. Indirect-drive ICF techniques have the fuel pellet placed inside a small metal vessel (hohlraum/burning chamber). Lasers are then focused on the hohlraum, heating it into a plasma which radiates X-rays that, in turn, are absorbed by the pellet. The pellet then compresses in the same way as ‘direct-drive’. Compared with direct-drive devices, the indirect-drive approach is significantly less efficient. But as thermonuclear bombs use a similar technique, the indirect-drive technique is used in nuclear weapon simulations.

To create electricity from ICF, fuel pellets are dropped into a vacuum reaction chamber where they are ignited. The radiation from the plasma and fusion neutrons is absorbed by liquid lithium. Heat produced is used in conventional steam generation and tritium is produced to be recycled as new fuel.

What are the advantages of fusion?

Fusion has the potential to produce massive amounts of energy from only a very small amount of fuel — only around 250kg a year in a commercial reactor — once sustained ignition is achieved.

The main advantages of fusion are the abundance of fuel compared with hydrocarbon sources, the lack of harmful by-products such as greenhouse gases, and its intrinsic safety compared with nuclear fission.

How is vacuum applied in nuclear fusion technology?

The vacuum requirement in fusion reactors depends on the type of confinement and the size of the reactor. The largest need for vacuum in magnetic confinement is in the central vacuum chamber and surrounding cryostatic chamber. This can be over 100 m3 which must be under UHV (around 10-9 mbar) to prevent contamination of the plasma.

Vacuum is also needed for the production of tritium, pumping helium and fuel recirculation. In the case of inertial confinement fusion, all the laser or particle beam lines must be evacuated along with the reaction chamber. As with magnetic confinement, this can be a very large volume requiring UHV to prevent losses and aberration in the beams. Turbomolecular and cryogenic pumps are the most commonly used and they must be able to cope with the localized peak in radiation and high magnetic fields. Similar concerns apply to primary pumps sets, gauges and valves.

Generally, vacuum is used in the entire cycle of magnetic confinement, including:

For inertial confinement, vacuum is required as follows:

What are the specific requirements for fusion applications?

One of the key requirements for vacuum pumps is the ability to handle tritium. This means that metal seals are preferred and pumps should be hydrocarbon free. In the case of magnetic confinement, the pumps must also be able to operate under high magnetic fields and shielding is often required. Space around the reaction chambers is very limited and shutdowns are extremely expensive, so pumps must have a small footprint and be highly reliable with minimal service requirements The future of fusion

There is debate over when net energy gain from fusion will be achieved, with optimistic estimates saying 10–20 years. Supporting this optimism is the fact that fusion projects around the world have begun breaking records. Scientists at the Joint European Torus, for instance, have recently “generated the highest sustained energy pulse ever created” with fusion technology.

Another recent fusion experiment, this time coming from researchers at the Lawrence Livermore National Laboratory, achieved a yield of more than 1.3 megajoules (MJ) — a key step toward achieving fusion ignition.

While 10–20 may seem like a long time away, the fusion industry is growing at a rapid pace. A sign of maturity, third-party services are starting to emerge, such as ARPA–E, an agency aiming to provide independent diagnostics for fusion projects.

Multiple new reactors are also planned, with several start-up companies looking for ‘faster routes to fusion’. One promising project is ITER, a tokamak-style reactor under construction (the largest in the world) looking to produce 10x more energy than it uses. One of ITER’s goals is to lead the way for DEMO, a prototype for commercial fusion reactors.

Across 18 countries, there are over 50 fusion devices either running or being built. Several privately funded devices are also being developed. So far, only one fusion device currently uses tritium due to limited supply. The cost of a working facility varies from $100M to over $20B.

Currently, no fusion facility produces a net energy gain. But as the energy density of fusion fuel is even higher than fission, and around 10,000,000 times that of fossil fuels, the technology promises to reshape the future of energy production.