The story behind the Holweck Pump

Fernand Holweck – A Hero of Vacuum

The legendary French scientist Fernand Holweck was born in 1890 and made significant impact on a breathtaking range of activities which are still highly relevant today. He studied at the Ecole de Physique et Chimie and graduated in 1910 having been amongst such luminaries as Pierre Curie and Paul Langevin.

In 1912 he became an assistant to Marie Curie and played an intrinsic role in the development of the Curie Institute. He is credited for his significant contributions to the systematization of the radioactive technique, which was created in the Curie Laboratory and spread thence throughout the world.

During the First World War he worked with Louis de Broglie on developing ultrasound techniques for the detection of submarines. In 1922 he received his Doctorate for his studies on soft x-rays, bridging the gap in understanding between the far ultraviolet region and x-rays: a classical study on the x-ray spectra of the elements of low atomic number. Holweck also developed the gravimetric pendulum (for surveying), a demountable high power radio tube, and was the first to develop the focusing of electrons and electron optics; in this respect he was at the forefront of the development of television.

In these latter activities his use of, and interest in improving, vacuum techniques was expanded. He designed and built the Holweck molecular vacuum pump (also known as the Holweck Pump) in 1920 achieving vacuum levels of 10-6 mbar, which contributed significantly towards vacuum-reliant research and industry. In the Holweck pump the pumping action is produced by a rotor usually in the form of a smooth cylinder. The stator is provided with spiral guide grooves. The design of the construction can also be reversed, with the stator being smooth and the rotor having the guide grooves. The principle is one of the exploitation of molecular drag. Today there are still totally Holweck based pumps, but the Holweck principle is now used mainly in combination with bladed turbomolecular pumps whereby the Holweck stage facilitates exhaust to high backing pressures and gives high process gas throughout. These pumps play a crucial and integral part in the vacuum techniques used in contemporary microelectronics production.

Sketch of the Holweck pump and pressure taps location including (a) 3D view of rotor and stator and (b) 2D unrolled stator representation. Source: Researchgate

Holweck continued to use this pump for his research into x-rays and radio-biological applications at the Pasteur Laboratory. In 1929 he independently confirmed, the quantized interpretation of the biological action of radiation on microorganisms and later on bacteria, fungi and viruses.

In 1938-1939, Holweck joined a group of French vacuum scientists from academia and industry to form the first national Vacuum Society aiming to promote vacuum sciences and techniques through education, which later became the ‘French society for vacuum engineers and Technicians’.

Holweck’s legacy to vacuum and science in general is undisputable however it is maybe best to leave the final words to one of his obituarists writing in 1942 in Science (Vol. 96 No. 2493 p33): ‘He has paid with his life for his love for freedom and for his country. His example will inspire all scientists of the world in their fight for the cause of liberty and democracy’. 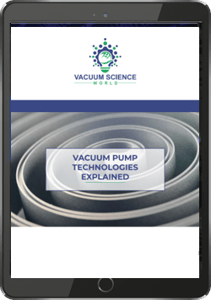 Vacuum Pumps come in many features and forms. Discover how to assess the right pump for your application or industry by looking at process conditions, vacuum levels and operating ranges in our free eBook.