The quality of a vacuum is indicated by the amount of gas molecules remaining in the system, as such a high quality vacuum is one with relatively few molecules left in it. Vacuums are primarily measured by their absolute pressure, however, whilst considering what type of measurement gauge to employ, consideration must also be made for vacuum system maintenance and safety, including “outgassing” and the control of contaminants.

For everyday vacuum measurements (such as in weather forecasting) inches of mercury function well, but for measurements on a finer scale, other units are needed. One “Torr,” a unit named in honour of Torricelli, is equivalent to one millimetre of mercury, yielding the figure of 760 Torr as normal atmospheric pressure at sea level.

Vacuum quality is sub-divided into ranges according to the technology required to achieve or measure it.

Low Vacuum (also called “rough vacuum”), can be achieved by basic equipment such as a vacuum cleaner. Medium Vacuum is typically achieved by a single pump, but the pressure is too low to measure with a mechanical manometer. High Vacuums usually requires multi-stage pumping and ion gauge measurement. Ultra-High vacuums (UHVs) require baking the chamber to remove trace gasses and other special procedures. Most standards define UHVs as pressures below 10-7 Torr.

How is Vacuum Measured?

As it has become practical and desirable to create higher and higher vacuums, it has also become necessary to measure the level of those vacuums accurately.

Vacuum gauges can be either direct or indirect, as well as either passive or active.

“Active” gauges incorporate an electronic sensor, which transforms the measurement into an electrical pressure signal with a compact electronic control and evaluation unit. They indicate the pressure measured either in the form of an analogue measurement signal or a numerical value through a standardised digital interface. “Passive” gauges do not feature an integrated electronic unit, so they need to be connected by cables to control units. This control unit will deliver power, and evaluate and display the measured data. Such control units are normally also equipped with analogue voltage outputs, digital interfaces and relay contacts for switch-points.

The Bourdon gauge, accurately and continuously indicates the pressure from atmospheric pressure (i.e. 760 Torr) to 20 Torr. This pressure gauge uses the principle that a flattened tube tends to straighten or regain its circular (cross-sectional) form when pressurised.

The capsule vacuum gauge contains a hermetically sealed, evacuated, thin-walled diaphragm capsule that is located within the instrument. As the vacuum pressure reduces, the capsule bulges. This movement is transferred to a dial (via a system of levers) and can be read off as the pressure on a linear scale. 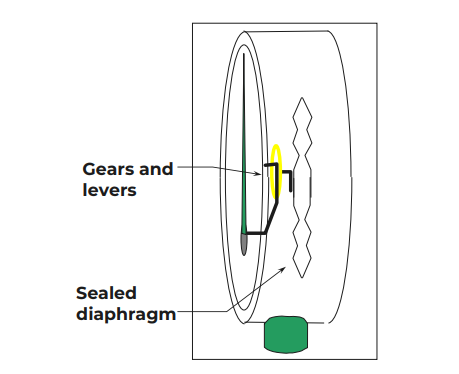 The capacitance diaphragm gauge (CDG) employs a diaphragm with a fixed electrode behind it (which creates a plate capacitor). When the distance between the two plates of this capacitor changes, it will also result in a change in capacitance (proportional to the pressure) which is then converted into an electrical measurement-signal.

Indirect gauges include the Pirani, the hot cathode and the cold cathode gauges:

The Pirani (or thermal conductivity) gauge, exploits the thermal conductivity of gases to measure pressure in the range from 10-4 mbar to atmospheric pressure. The filament within the gauge head forms one arm of a Wheatstone bridge. Since the heat transfer from the filament to the gas increases with increasing pressures, the voltage across the bridge is a measure of the pressure.

The hot cathode ionisation vacuum gauge emits electrons from a heated cathode which are attracted to a positively charged anode, during their flight they ionise gas molecules; the ion current produced being proportional to gas pressure. The hot cathode sensors which are mostly used today, are based on the Bayard-Alpert (BA) principle. A BA vacuum gauge collects positive ions on a thin ion collector wire and measures the resulting current to the ion collector to determine the number density of molecules present, and indicates a pressure based on that measurement.

The cold cathode ionisation gauge is so named because the cathode is not heated and commonly operates on the inverted magnetron principle. In this device a gas discharge is ignited by applying a high voltage. The resulting ion current is output as a signal, which is proportional to the prevailing pressure. The gas discharge is also maintained at low pressure with the aid of an applied magnetic field.

The presence of gaseous molecules, whether slow or fast moving, is what gives rise to pressure. By reducing the number of molecules that exert a pressure on the internal surface of a chamber, one reduces the pressure, however, this causes “additional” molecules to enter into play. These additional molecules have three main sources: (i) near-surface molecules that would otherwise be snagged or entangled in the microscopic roughness of the surface; (ii) molecules that are embedded within the internal surface of the chamber itself and that “bubble” up-and-out of the surface as the vacuum increases and the restraining pressure is removed; and (iii) additional molecules due to “contamination” (which we explain further down the page).

These various (and combined) sources of “additional” molecules prevent vacuum pumps from easily obtaining, and maintaining the level of vacuums that they can—and should—be able to obtain in a timely and predictable manner. The solutions are numerous but fall into two categories: (i) “baking” the components; and (ii) ensuring that all materials employed are as low in contaminants as possible.

Baking involves heating items (ideally up to 400oC, if UHVs are to be achieved). However, pump manufacturers usually specify a maximum bake-out temperature in the high vacuum pump flange to 120oC.

All bakeable materials (wherever they are located in the system) must be fairly isothermally homogeneous, otherwise cold-spots will collect the very contaminants they aim to remove.

When it comes to vacuum system maintenance, contaminants are all detrimental in terms of safety, yield, economics, reliability, sustainability and environmental impact of your system. They must therefore be controlled and their impact mitigated against.

However vacuum system contamination occurs, when creating a vacuum, their impact increases from negligible to tolerable, and then from problematic to seriously detrimental.

Five major sources of vacuum systems need to be countered:

Fortunately, there are a number of ways that the impact of contaminants can be reduced/eliminated:

Our eBook explores how to identify the root cause of malfunctions in a vacuum system such as contamination, slow evacuation times, troublesome pumps or poor ambient conditions. Improve the operational capability of your vacuum system by downloading today.

As with all industrial processes, safety should be the very first (and most important) consideration for those designing and working around vacuums. There are eight major vacuum system safety issues (and a myriad of minor ones). These include:

However, in this article we are most concerned with gas safety.

There are a number of easily achievable remedies that can mitigate against such gas systems and gas-associated product accidents, these include: ensuring that the mixture of flammables and oxidants are kept outside the flammable range; confirming that exhaust blockages cannot occur during operation; use of perfluoropolyether (PFPE) oils in places where the pump mechanism is exposed to high concentrations of oxygen or other oxidants; guaranteeing that the failure of a pressure regulator or purge control system cannot lead to accidental over pressure; and using a heat transfer fluid where the pumped product can react violently with water.

Construction safety can be enhanced by only employing skilled and qualified personnel, following quality assurance procedures. Furthermore, personnel must observe all safety precautions when installing new equipment in a system in which toxic, corrosive, flammable, asphyxiant, pyrophoric or other hazardous substances have been pumped, produced or may still be present. Similarly, electrical equipment (including monitoring, measuring or calibration elements) must be installed by skilled/qualified personnel in accordance with national laws and proprietorial regulations.

To prevent personnel coming into contact with dangerous substances during maintenance, decommissioning or disposal of components which may have been (or are still) exposed to dangerous substances, the instruction manuals associated with such equipment must be strictly followed.

There are a number of physical hazards associated with vacuum systems, these include: the introduction of high-pressure gas into the system; the compression of gas by the system; the sudden increase in temperature of volatile gas(es) in the system; a phase change leading to the deposition of solid products; a reaction inside the vacuum system; and a blocked exhaust.

Vacuum system safety is enhanced by knowing the system, the products employed and following strict procedures. Such precautions include: knowing (and adhering to) the safe working pressures; safeguarding that exhaust portals cannot become blocked; including over-pressure systems (should this be considered a risk); anticipating abnormal and faulty conditions when assessing the pressure rating; incorporating the correct type of pressure relief valve; guaranteeing that the compressed gas supplies are properly regulated and monitored; and ensuring that pressure relief is possible in the event of component failure.